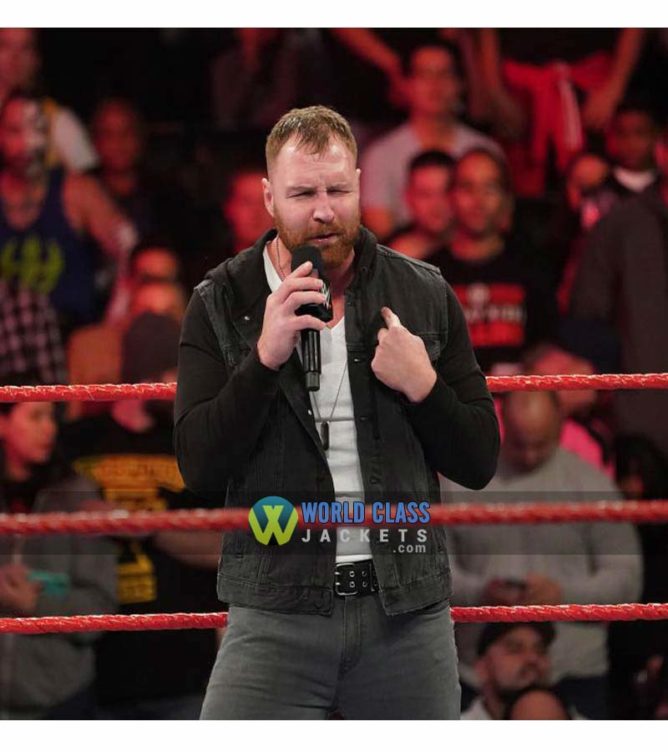 Disclaimer: As You People Know This Jacket Is Replica Of Dean Ambrose Denim Jacket & May Be Different in Looks In Real, Because of Using Heavy Lightning and Photo Shoot Effects In The Showing Pictures. But We Guarantee Our Customers 100% Premium Quality  Product.

Dean Ambrose Black Denim Hoodie is made of High Quality Denim Fabric to give you an awesome look. You can also Order it in Faux Leather, Real Leather and Cotton Fabric too. This is the best and perfect casual jacket for Men and Women.

We Are Offering Special Discount of 25% OFF on this Dean Ambrose Slim Fit Jacket. Get This Awesome Offer and Buy This Jacket and Save $40.

Jonathan David Good (born December 7, 1985) is an American Professional Wrestler currently signed to WWE, where he performs on the Raw brand under the ring name Dean Ambrose. Dean Ambrose is also known for his work on the independent circuit under the ring name Jon Moxley between 2004 and 2011. He worked for various promotions including Full Impact Pro (FIP), Combat Zone Wrestling (CZW) and Dragon Gate USA (DGUSA), winning the FIP World Heavyweight Championship once and the CZW World Heavyweight Championship twice.

Nobody can stop Outrageous Dean Ambrose when he gets crazy during the fight and this what his fans love about him. Recently Dean Ambrose (American professional wrestler) challenged Seth Rollin for the title and comes up in the ring with the attitude and put up this Black Distress Leather Jacket. After the popularity and devotions of people, they all want to wear up this Jacket so we decided to make exactly the same item for WWE Fans and We did it. Also Other Dean Ambrose Bomber Black Leather Jackets are Ready for you guys.

Jonathan David Good (born December 7, 1985) is an American professional wrestler and actor currently signed to All Elite Wrestling (AEW), where he performs under the ring name Jon Moxley. He also makes appearances in New Japan Pro-Wrestling (NJPW), where he is the current IWGP United States Champion in his first reign. Good is well known for his time with WWE, where he performed as Dean Ambrose from 2011 to 2019.

Ambrose made his television debut on the July 3 episode of FCW where he challenged FCW 15 Champion Seth Rollins. The following month, Ambrose and Rollins had a 20-minute non-title Iron Man match; the match ended in a draw with neither man scoring a fall. A 30-minute rematch, in which the title was on the line, took place in September which Rollins won through sudden death rules.